A. Near the top of New Farm Drive, opposite Knights Walk, there's a small offroad parking bay (P) big enough for a single vehicle. From there, walk back down New Farm Drive (1) to the main road (Ongar Road) and turn left. Walk along the pavement for less than a quarter of a mile to Abridge Mews and then turn right onto Abridge Road to cross the bridge over the River Roding (2). At the north end of the road-bridge, turn right over a stile into the field immediately north of the river.
B. Cross the field (known as Bloody Mead) diagonally towards the stile (3), and climb over it into the next field. Continue north east with a fence on your right, to a stile on the left of a metal gate (4) and walk north along the field edge to Epping Lane.
C. Turn right on the lane for about 50 yards then turn left into a field with a ditch on your left. After another 30 yards, cross the ditch at the waymarker and continue north, now with the ditch on your right (5).
D. After about another 200 yards bear right following the field edge and shortly after, cross the wooden footbridge[FB_I] on your right (6) and turn left to continue north. Keep walking along the field edge to a second footbridge[FB_II] and stile.
E. From the far side of this stile you can see Hydes Farm on the crest of the hill, with a neat hedge around the farmhouse and some trees to the east (7). Walk diagonally across the field, aiming for these trees. As you approach the brow of the hill you will see a stile ahead of you leading to the farm access road (8).
F. Cross over this stile and continue north east along the access road, which follows the route of an old Roman road. The views from here are lovely.
G. At a black gate, turn right to continue along the access road, now walking east (9). After about 120 yards the road turns right, heading south. Continue walking until you return to Epping Lane.
H. Turn left on Epping Lane and walk for about a third of a mile. You will pass a couple of footpath signs on the right, but carry on until you are in sight of Hobbs Cross Road (leading to the Hobbs Cross open farm) on the left. Opposite this junction there is a kissing gate on the right (10) leading to a beautiful meadow: walk south through this. The meadow narrows at its southerly tip, and right in the corner, under the tree, is a metal footbridge[FB_III] (11).
I. On the far side of this footbridge you can see the next footbridge[FB_IV] ahead of you; cross the field diagonally to the south east, cutting off the south west corner, to reach this bridge. Directly ahead of you is a another small footbridge [FB_V], this time reached via the field edge (12).
J. The signage after this footbridge [FB_V] is confusing: the waymarker appears to send you due east along the northern edge of the field (dotted purple line on OS Map), whereas OS Explorer maps and the signage at the exit point from this field put the path along the southern edge, running roughly along the banks of the river. So turn right as you leave the bridge and follow the river to yet another footbridge [FB_VI] - a sturdy concrete one this time (13).
K. Walk to the side of the Ongar Road and turn right for about 30 yards to the turning on the left to Patch Park Farm, on the left of the nursery (14).
L. Walk up this access road for about half a mile - there are some good views of the aerodrome to be enjoyed as you go - and through a small business park, to a substantial leylandii hedge which marks the boundary between the semi-industrialised area and farmland. Go through the gap in the hedge, and continue walking south uphill between two fields (15) until you come to another footbridge [FB_VII] (16).
M. Turn right after this bridge to walk alongside the field edge for about 25 yards, where you will see a waymarker in the hedge directing you south east across the field. When we were there the route across the field was not clear, but you can see a couple of solitary oak trees in the field to your right, and beyond them a small copse (17). Aim for the copse.
N. Pass to the left of the copse, then walk south to the corner of the woods you can see projecting into the field. From the edge of these woods turn right to cross the field towards a metal gate with houses beyond. Continue in the same direction along Church Lane (18) towards Lambourne Church, which is well worth a look around if you have the time.
O. Carry on along Church Lane, which becomes less of a road and more of a track, until you come to a white fence with a 'Private Road' sign attached (19). Immediately in front of this, on the right, is a little wooden gate into a field, with a stunning view across the Roding valley.
P. Once through the gate, turn left and follow the fence alongside a line of trees(20) until you come to the entrance into Soapley's Wood (21). Turn right once in the woods and follow the path until you emerge from the woods into a beautiful sloping meadow, full of friendly horses when we were there. The exit from this field is via an unnecessarily complicated final concrete footbridge near[FB_VIII] the north west corner of the field (22).
Q. Continue roughly north west though the next field, exiting onto New Farm Drive near the boundary of an imposing private house. Turn right, and walk down the lane (23) back to the parking.

Although the village of Abridge is believed to be Saxon in origin, the area was first inhabited much earlier than that. There is archaeological evidence of a number of Roman villas near the village, and some think that Abridge was the site of a Roman posting station (a military coaching inn), called Durolitum. The field to the north east of the road bridge is known as 'Bloody Mead' and is believed to be the site of a battle in Roman times. The old Roman road from London to Great Dunmow passes just to the west of the present day village, and this walk follows the route of that road for a quarter of a mile or so, as you pass north east across a field and along the first part of the access road near Hydes Farm.

The airfield originally opened in 1933 as a base for Hillman Airways, running a scheduled service to most of Europe. After a couple of years they fell into financial difficulties and Stapleford became just a base for a few private aircraft, until the RAF established a training school here in 1938. During WWII several squadrons of Hurricanes were based at Stapleford and despite problems with the size and surface of the airstrip, the airfield played a significant role in the Battle of Britain. During 1941 the airfield briefly served as the base for the SOE (Special Operations Executive), dropping agents and supplies behind enemy lines. Facilities must have been poor, because during this time the pilots had to live in tents and wash in the River Roding! After the SOE left, the airfield was again home to squadrons of Hurricanes, then became the headquarters of a new Air Sea Rescue unit, and later was used as a base for the build-up of personnel prior to the invasion of Europe. In the last stages of the war the airfield was hit by two V2 rockets. The first left a crater 60 feet wide in the airfield and the second, on 23rd February 1945, killed 17 personnel outright and injured a further 50. The airstrip played no further part in WWII, although it was used by the Royal Engineers after the war to store plant and heavy equipment acquired by the army and used for clearing minefields, constructing shooting ranges, and other major projects. The Army moved out in 1948, and since 1953 the airfield has been owned privately and is now the home of the Stapleford Flying Club. The site is also home of the Lambourne VOR aircraft navigational beacon which anchors the North East (NE) Arrival Stack for London Heathrow Airport, and is a fix for air routes to the North. 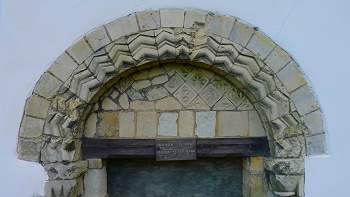 The church of St Mary and All Saints is a beautiful building. It was originally built in the 12th century and although it has been extensively re-built since then, it retains many interesting historic architectural features. Several of these are visible from the outside, including the north doorway with a classic early Norman semi-circular arch and geometric carvings (believed to date from 1120) and the (blocked) lancet window on the south side, which is 13th century. Despite the ancient exterior, the interior of the church was extensively re-modelled in the eighteenth century. The renovations were so thorough that from within, the church appears to actually be Georgian. You would never be allowed to treat an historic building in that way today! If the church is open when you visit it is well worth a look around.

It's not often that a footpath can be dated precisely, but this one can: it was created in 1624 by Edward Palmer of Dews Hall, who used to own land near St Mary's Church in Lambourne.

The background to the story is that the village of Abridge formed part of the parish of Lambourne, with St Mary's as its parish church. Unusually, there was no direct road linking Lambourne and Abridge, which meant that for hundreds of years Abridge residents had walk across the fields to get to and from church. At some point, a right of way was granted through lands owned by Dews Hall, for this specific purpose. But in 1589 Henry Palmer of Dews Hall was summoned before the local courts because he had built a fence blocking off this ancient right of way (he had 'enclosed abowte with a great pale a chace waye which is our church waye and hath been time out of mind,'). We do not know whether the original footpath was restored, but in any case there were further problems and by 1624 the church path was 'by discontinuance overgrown, and overworn by the current of the brook which ran by it'. To resolve the matter Edward Palmer granted a new right of way for the villagers, and the revised route was written into the parish records. The current footpath follows this new right of way, meaning that this same path has been walked for very nearly 500 years.